It has been almost a year since Rusty had his treatment for hyperthyroidism.  When he came home from his radioactive treatment in Richmond, we were instructed to have him tested at the 3, 6, 9 month and 1 year mark.  To date he has passed his tests, and we are quite happy.  None of my other posts mentioned it, but Rusty lives with 3 other cats in our 4 cat household.  In no particular order we have: 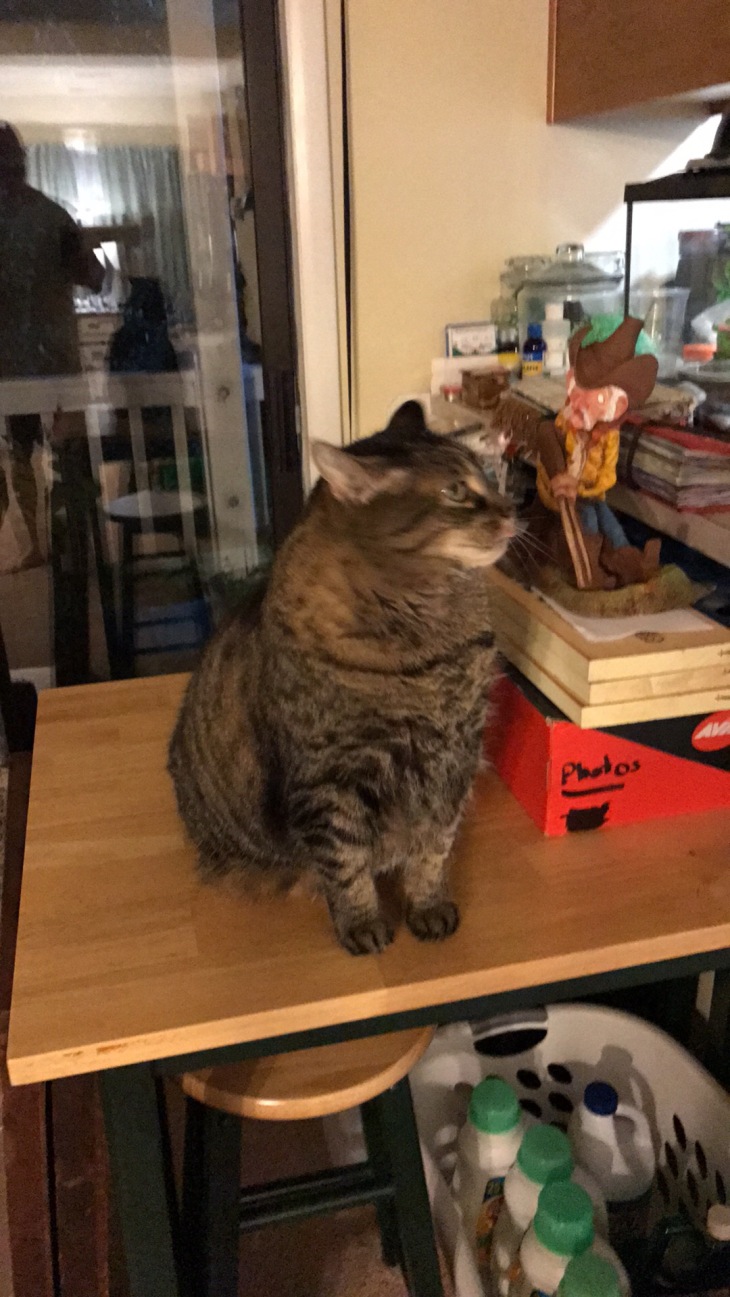 and our newest member (nearly a year) RJ.

Rusty came home from the kitty hospital last week – he had his treatment on Monday and came home on Wednesday.  Many thanks to Dr. Howard and the staff at Virginia Veterinary Centers for taking good care of him.  We have had to take some precautions because he is still slightly radioactive but it is good to have him home.  Rusty and the house have returned to what passes for normal around here.  His thyroid needs to be checked periodically over the next year, but he already seems much better than when we took him in.

We went to see Pompeii: The Immortal City at the Virginia Science Museum today.  It was excellent and if it comes to a museum near you I highly recommend going.  You can learn more abut it here.

Not exactly the most exciting week…heck who am I kidding, having Rusty come home was exciting.

We dropped Rusty off at the pet hospital in Richmond today.  Rusty has feline hyperthyroidism where errant thyroid cells produce too much thyroid hormones creating all sorts of problems.  Weight loss with an increased appetite were the two symptoms that we discovered.  The treatment option we chose is radioactive iodine therapy.  The thyroid requires iodine to produce the T3 & T4 hormones.  In the case of hyperthyroidism, the errant cells are doing all the producing and the healthy cells are currently “off”.  So with the radioactive iodine therapy, radioactive iodine is injected and absorbed by the bloodstream.  The errant cells absorb the radioactive iodine which eventually kills them.  When all the errant cells are killed (or enough), the healthy cells are restarted and the thyroid operates as normal.  There is roughly a 95% cure rate.  Rusty will have to spend a few days in the kitty hospital until his radiation levels are at the acceptable level where he can be discharged, and we have to treat his waste in a special way for a few months, but otherwise this seems to be a simple procedure.  This is the same treatment that is available to humans with a hyperactive thyroid – its just the humans get a radioactive iodine pill.  I will update as the treatment progresses.

Hopefully my layman’s explanations make sense.  If you want more information, I suggest a quick search for Feline Hyperthyroidism and perusing legit websites like Cornell University, Washington State University, or WebMD Pets.  Also, there are more pictures from Rusty’s visit on my Instagram: thejollyhistorian.